Thank You, Mr. President Soundtrack - Based on a Darren Detoni Story 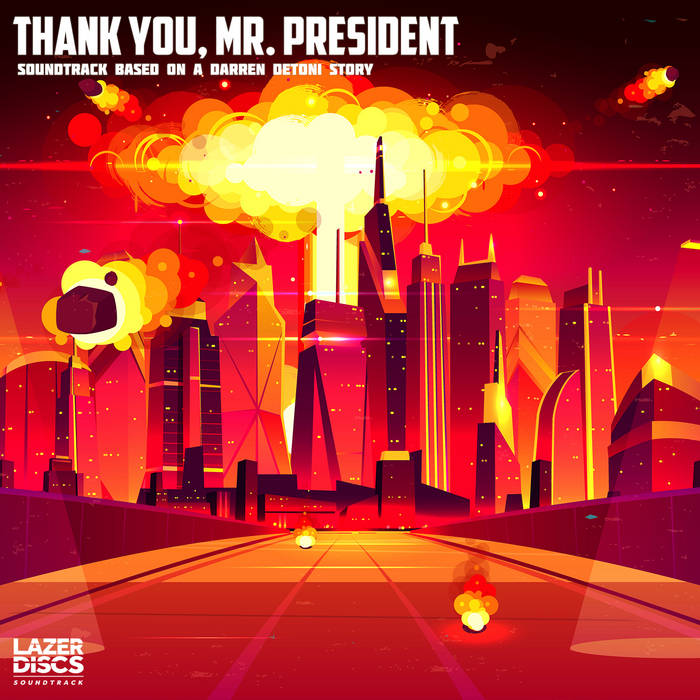 jusafan Ever since discovering Lazer Disc Records I've been hooked. It's rare to find musicians come together and make a compilation album based on a short story. I'm looking forward to what's yet to come! Keep it coming!

palehorse666 an interesting story and great synth to go along with it from artists who know what they're doing. Favorite track: Psychorro.

“From the mind of one of the Monolith’s most prolific writers, Darren DeToni presents a sick and filthy tale, drenched in blood (plus other juices) and covered in the ashes of nuclear fallout.

‘Thank You, Mr. President’ takes readers on one hell of a ride through the mind of a demented President; penetrating strange portals; befriending a perculiar force known as ‘Neville’; nukes lot’s of nukes! And the tale never dares to let up as the pace is constant, reeling you in, keeping you close to the action.

Be prepared, though, because by the time the story is finished, you will be, too. But hey, don’t take my word for it! Go ahead, give it a read... I DARE YOU...”

“Mr. President, the rockets are ready to go. Shall I give the order to launch?”

“You betcha, let’s get this light-show on the road!”

The future decided in a boardroom... ‘Thank You, Mr. President’!

Lazerdiscs Records present to you for the first time an audio story released on the label... and with its own arsenal-packed soundtrack, featuring exclusive tracks from Absolute Valentine, Powernerd, NIKY NINE, Until Ben, Aeronexus, Baldocaster, Francci, and Z6B3R!

‘Thank You, Mr. President’ an original surreal story by Darren deToni about the end and then the beginning of the world is read by John Michael Lowe, who also provides his own piece of delightfully dark music.

‘Thank You, Mr. President’ the Soundtrack is another dimension to what these artists can do when given something to play with... just like Mr. President himself!

Press play and enjoy the madness from the safety of your own home. The mind-boggling madness will make you move whatever the mood, we just hope Neville doesn’t turn up...

Do you want two more tracks and be able to read the full story before the release date?

If you like Thank You, Mr. President Soundtrack - Based on a Darren Detoni Story, you may also like: